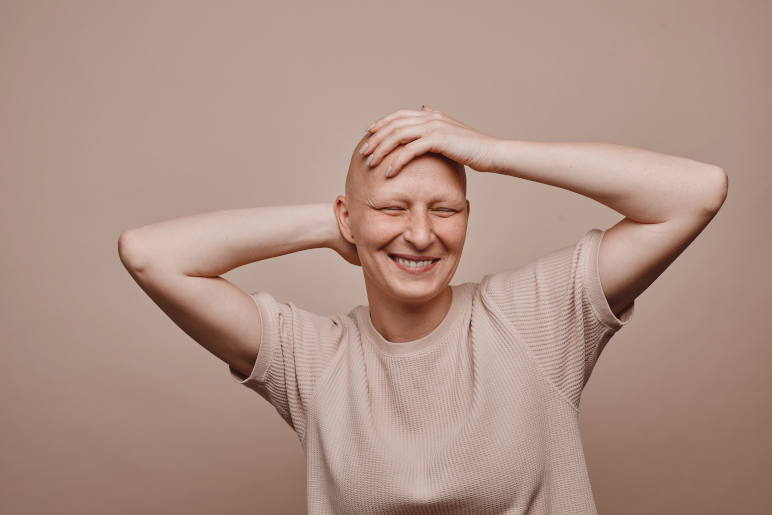 Alopecia – The Types, Causes and Treatments

Alopecia is a broad term that refers to any type of hair loss in both men and women. There are, however, various types, each with its own distinct name, cause, symptoms, and treatments.

Why Does Alopecia Start?

Alopecia begins with thinning hair or the appearance of circular bald spots. It starts when your cells begin to attack the hair follicles (which can be due to an autoimmune disease or androgens).

What causes hair to fall out?

The type of Alopecia you have will help aid in determining the cause. However, the most common causes of hair loss are:

What Are The Different Types of Alopecia?

Several types of baldness can affect men, women and even children, but there are 3 main types:

These 3 types of Alopecia are caused by an autoimmune disease that attacks the hair follicles because the body’s immune system identifies them as foreign cells. Although they are all caused by the same thing, each type has different symptoms and the hair fall is at different extremities.

Guidelines published by the British Association of Dermatologists’ stated that the symptoms of AA develop into AT or AU in 14-25% of patients with Areata.

Alopecia Areata starts as 1 or 2 coin-sized and smooth bald spots on your scalp, body, or facial hair. However, in rare cases, hair loss is diffuse instead of defined patches.

The severity varies from person to person. In some cases, the hair grows back whereas other cases develop into AT or AU.

Alopecia Areata is caused by an autoimmune disease whereby your immune system mistakenly attacks your hair follicles. This causes inflammation in those specific areas of the scalp which causes your hair to fall out.

It’s not fully understood why the body identifies the hair follicles as foreign cells, or which it occurs in localised, defined spots. AA often goes hand-in-hand with other autoimmune diseases e.g. thyroid disease, lupus etc.

Alopecia Totalis is characterised by total loss of hair on the scalp. It’s an advanced type of AA whereby the patches of hair loss have expanded.

AT is a rare autoimmune disease that is typically triggered by genetics – especially in early-onset Alopecia Totalis.

AT has the same initial cause as AA. However, for unknown reasons, your immune system attacks your hair follicles across your whole scalp instead of in patches.

Alopecia Universalis is the next level after AT. After AA develops into AT, you can start to lose your eyebrows, eyelashes, chest hair, armpit hair and pubic hair, arms and legs – which is then defined as Alopecia Universalis. It is the most severe form of Alopecia Areata.

It can occur at any age and develop at different speeds. AU is also an autoimmune disease that has become more advanced than AA and AT.

Traction alopecia, as the name suggests, is hair loss caused by the action of pulling against the hair follicles.

Wearing tight hairstyles, including ponytails and braids, puts tension on the hair roots which causes this form of hair fall. Repeatedly pulling at your hair damages your hair follicles and slows down hair growth.

This form of Alopecia is also common among Sikh men because, as part of their religious practice, they are forbidden to cut their hair. Consequently, their hair is tied in a tight top bun before wrapping their turban around their head. This puts excessive tension on hair follicles, resulting in traction alopecia.

Androgenic Alopecia (aka male/ female pattern baldness) is the most progressive hair loss which spans several years or decades.

Pattern baldness affects approximately 50% of men over the age of 50 and nearly 50% of women above 65. Symptoms can start at any age, but generally the younger it starts the faster it progresses.

Pattern baldness is genetic, specifically it’s inherited from the maternal side. The male hormone dihydrotestosterone (DHT) shrinks hair follicles which causes Androgenic Alopecia. DHT comes from testosterone which is typically a male hormone, however, it’s also present in women.

DHT causes your hair follicles to become smaller which then causes the strands to become thinner and more fragile and eventually fall out.

Alopecia Barbae is a form of Alopecia that only targets your facial hair. Therefore, in a similar fashion, it’s an autoimmune disease that causes bald patches in your beard.

It’s common for this type of hair loss to occur on and off across several years. During this time the hair can grow back and fall out again for reasons unknown to us yet.

The cause of alopecia barbae is the same as AA, it’s an autoimmune disease that attacks your hair follicles. Although it causes similar symptoms, it’s unclear why it only affects facial hair.

The symptoms of frontal fibrosing alopecia cause scarring at the top of the forehead which forms band-like baldness. It’s a form of lichen planopilaris that is responsible for slow, progressive hair loss in a symmetrical band on the front and sides of the scalp.

The cause of frontal fibrosing alopecia is unknown. However, it’s thought to be an autoimmune disease that (like with AA) attacks the hair follicles as it thinks they’re foreign to the body.

What Is the Best Hair Restoration Treatment for Alopecia?

Due to the lack of clinical information and treatments for Alopecia, it causes substantial psychological effects. The emotional impact that it has, can create a loop effect where the hair loss triggers depression which then triggers stress and further hair loss. You can find helpful support on the NAAF Support Group Network.

Which celebrities have alopecia?

Many celebrities have shared their alopecia stories, including Naomi Campell and Matt Lucas. A few years after being hit by a car, Matt Lucas developed alopecia Totalis, aged 6. So, this traumatic event is what’s believed to be the trigger of his hair loss.

In this article in The Guardian Matt Lucas talks about his experience being called a “slaphead” and “skinhead, but mainly “baldy”. He emotionally shares how he felt “eternally self-conscious, constantly stared at, teased, mocked and bullied”.

A large part of a person’s life is their appearance thus when this is compromised by uncontrollable alopecia it’s distressing.

Depending on the cause, there are numerous effective treatments. However, a hair transplant is the only treatment option that is a long-term one-off procedure, as others require a daily application or have numerous and significant side effects.

Use our free online assistant tool to submit your hair loss concerns - it only takes a few minutes. We will provide you with a personalised no-obligation quote.

What Can I Do To Stop My Alopecia Areata Symptoms?

What is the best treatment to stop my hair fall?

How to know if you need a hair transplant, and how to make sure it’s a good one

Can hair grow back after balding?